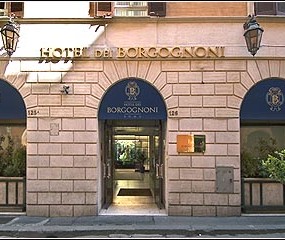 Situated in one of the most beautiful and exclusive areas of the city, between the Spanish Steps and the Trevi Fountain, Hotel dei Borgognoni embodies all the atmospheric charm of a truly fascinating, yet almost unknown corner of central Rome.  No ordinary hotel, the Borgognoni is a heaven for those in search of peace and tranquillity. In addition, it is located right in the pulsing heart of the capital, just a short walk from some of the city's most famous landmarks. A unique location for a charming hotel of timeless elegance.  The Hotel dei Borgognoni is housed in a 19th-century mansion house once the property of the Farmiento brothers, who, in the years after 1870, had it restored, bringing it up to the same height as the two adjacent buildings. Today, the hotel maintains its philosophy and taste that have been handed down for many centuries, with a historical ambience that will not and must not go down, while remaining abreast of the times. All guest rooms are furnished with a desk, Satellite TV, Pay TV and WI-FI internet connections.  Continental breakfast is included. 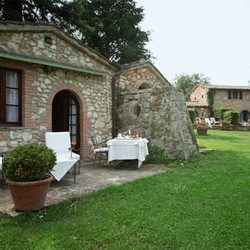 Imagine a seventeenth-century rural village in the middle of a natural park of over 60,000 sq. m., hidden away among the rolling Chianti hills in the Tuscan countryside. Relais Borgo San Luigi is a four-star hotel ideal for lovers of art, nature and gourmet food and wine. In the middle of one of Italy's greenest areas and just a stone's throw from the best-known Chianti and Brunello winemaking companies. An excellent base for visiting the fascinating Tuscan art capitals of Florence and Siena and evocative towns like San Gimignano, Volterra and Monteriggioni. The air-conditioned guest rooms face onto the large park and are well furnished with antique furniture & fabrics and some have romantic four-poster beds, satellite TV & mini bar creating the perfect setting for a break in harmony with nature. Continental buffet breakfast is included.