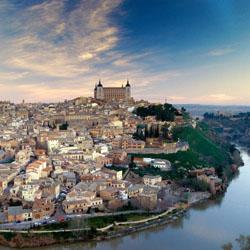 Discover the “City of the Three Cultures”. Located 70 km away from Madrid is Toledo, a beautiful city-museum declared World Heritage Site by UNESCO. It is one of the oldest towns in Europe and has a great artistic beauty and buildings from almost all periods in history (Arabian, Gothic, Mudéjar, Renaissance and Baroque style). Toledo is called the “City of the Three Cultures” since Christians, Muslims and Jews lived together. In the XVI century, it was also home to the great painter El Greco.  The tour includes the outside view of the Cathedral; Church of St. Tomé with El Entierro del señor de Orgaz, masterpiece of El Greco; Synagogue of Santa María la Blanca; Monastery of San Juan de los Reyes; demonstration of the famous technique of damascene (incrustation of precious metals in steel) and Panoramic Sightseeing of Toledo.