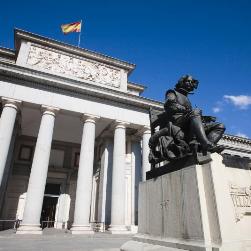 Take your camera or smartphone and join our walking tours and motor coach tours to remember Madrid in a different way! Madrid shows the multiple contrasts inherited through History. Elegant squares such as Plaza de Oriente, Plaza de España, Parque del Oeste, Príncipe Pío, El Puente del Rey, la Ermita de la Virgen del Puerto, ending at Segovia’s Bridge - Puente de Segovia, one of the best viewpoints of the Royal Palace and the Cathedral of Almudena. We will continue to Puerta de Toledo, Plaza de la Villa, Plaza Mayor, Puerta del Sol, Las Cortes, Plaza de Neptuno, Atocha, Paseo del Prado, Puerta de Alcalá, Alcalá street, the Retiro’s Park and Las Ventas Bullring, plenty of cheers and colours in the afternoons of the bullfight. We will return to the city centre through Plaza de Colón. We will continue towards the New Madrid, with its modern buildings, gardens, its great avenue Paseo de la Castellana, until Plaza de Castilla (Europe’s Gate) and we’ll go down towards Santiago Bernabéu Stadium, Plaza de Cibeles, Gran Via and Plaza del Callao, to end at Plaza de Isabel II (in front of Royal Opera House). We will make convenient stops to rest and take pictures at Plaza Mayor, Templo de Debod and Las Ventas Bullring, if the weather permits and always accompanied by our guide.
PRADO MUSEUM TOUR: The building that today houses the Prado national museum was designed by architect Juan de Villanueva in 1785. It was constructed to house the Natural History Cabinet, by orders of King Charles III.However, the building's final purpose - as the new Royal Museum of Paintings and Sculptures - was the decision of the monarch's grandson, King Ferdinand VII, encouraged by his wife Queen Maria Isabel de Braganza. The Prado National Museum opened to the public for the first time in November 1819.
The Museum's first catalogue, published in 1819, included 311 paintings, although at that time its collection comprised just over 1,510 pictures from the various Reales Sitios (Royal Residences). The exceptionally important royal collection, which represents the foundation of the Museum's compilation as we know it today, increased significantly in the 16th century during the time of Charles V and continued to thrive under the succeeding Habsburg and Bourbon Monarchs.It is thanks to them that we can contemplate in the Museum masterpieces such as The Garden of Earthly Delights by Bosch, The Nobleman with his hand on his Chest by El Greco, Las Meninas by Velázquez and The Family of Carlos IV by Goya.
The visit will take place in chronological order, starting with the exhibit hall where we will find J. Bosch’ masterpieces (El Bosco) (1450-1516): The Table of the 7 Deadly Sins, The Hay Wain, The temptations of San Antonio, The Stone of Madness and The Garden of Delights. We will then move on to the rooms devoted to the Greco (1540-1614): The gentleman's hand on his chest, The Trinity, Christ embraced the cross and The Annunciation; Velázquez (1599-1660): The Worship, Drunkards, Equestrian Portraits, the Forge of Vulcan, The Christ, The spinners, Spears and Las Meninas; and we will end with Goya (1746-1828): The family of Carlos IV Pictures, The Shootings of May 2, Pestles and Black Paintings