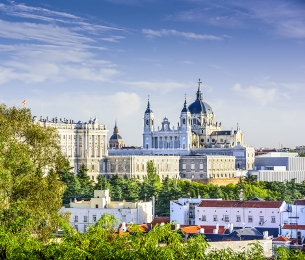 Madrid shows the multiple contrasts inherited through the history. During this guided city tour you will be able to find the medieval origins of the city, like the Arabic fortress, at the Barrio de la Morería, characterized by the antiquity of its buildings and the taste of its typical restaurants. We will cover the Hapsburg Madrid of Felipe II with its Renaissance and Baroque buildings, walking and making pictures on Calle Mayor, Plaza Mayor, Plaza de la Villa. Then, we will see the Madrid of the Bourbons and the urban layout made by Carlos III with the Royal Palace, the Cibeles Fountain, Neptune Fountain and the Puerta de Alcalá. We will also admire the works from the kingdom of Joseph Bonaparte in the 19th century, such as Prado Museum & the elegant Plaza de Oriente, and then continue to discover the contemporary Madrid with avenues such as Gran Vi­a, Castellana, Paseo de la Castellana, the Barrio Salamanca district, Plaza de Castilla and Parque del Oeste, as well as the commercial & financial areas of Modern Madrid, like the emblematic Ventas Bullring or Santiago Bernabéu Stadium. During this tour, we will stop at the famous Hard Rock Café, where you will enjoy a free drink. Certainly, the highlight of this tour is a visit to the Royal Palace, the official residence of the Spanish Monarchy from 1765 to 1931. Built in the XVIII century upon the ancient Baroque Italian style fortress of the Habsburg, this magnificent palace is one of the most beautiful and best-preserved palaces in Europe and a symbol of the permanence and consolidation of Madrid as the capital of the Kingdom. This Bilingual tour (English & Spanish) has a duration of 4 hours approximately and ends at the Royal Palace.