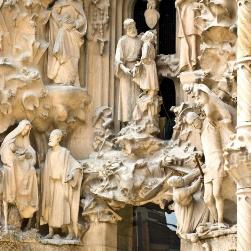 Driving through the province past picturesque little villages, we reach the rugged Monserrat Mountains home to one of the most popular pilgrimage destinations in Spain: the Shrine of Our Lady of Montserrat. Visit the Royal Basilica where we will admire the famous XII Century Romanesque sculpture of the "Virgen Moreneta" (Black Madonna) from a distance. According to Catholic tradition, the statue of the Black Virgin of Montserrat was carved by St. Luke around 50 AD and brought to Spain. It was later hidden from the Moors in a cave where it was rediscovered in 880 AD by a group of young shepherds who for several days saw a bright light and heard heavenly music that eventually led them to the grotto and the statue. A monastery & basilica were built near the site and since the 12th-century, pilgrims have been drawn to the mountain to venerate the miraculous statue of the Black Madonna. On some days, the children's choir sings in the monastery at midday, and you may be fortunate enough to catch one of their delightful performances. Your tour also includes a taste of 4 typical liquors of Montserrat plus entrance fees to the Audiovisual "Montserrat Portes Endins" with some free time to visit the audiovisual exhibition about the history & creation of Montserrat, before returning to Barcelona. There will be some free time (about 35 minutes) for a quick lunch in the city centre before checking back in at Julia travel office for your afternoon Artistic Tour. Meet your guide and come aboard an air-conditioned coach towards Sagrada Familia. Enjoy a panoramic tour of the exterior of the Sagrada Familia and marvel at the extensive symbolism of its façade details. Board your bus back again for a short trip to the Park Güell, located in the upper part of the city to enjoy a guided tour of the Park with your local guide and discover why it is one of the most emblematic works by Gaudí. Wonder at the magnificent skills of Gaudí and its organic style, displayed all over the park. Did you know the Park is a World Heritage Site by UNESCO? Then board the coach again for a short trip to the Sant Pau Art Noveau Masterpiece where your guide will give you an explanation of the exterior of the building and tell you about the history of the site and the ideas of the architect Lluís Domènech i Montaner.  The tour ends at the Sant Pau Art Noveau Site, on Sant Antoni Maria Claret Street, 167. Bilingual tour (English & Spanish) with a duration of 10 hours approximately.