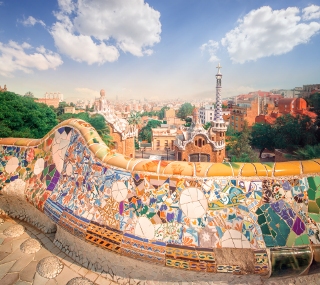 In Barcelona, history and traditions go hand in hand with emerging fashion and new trends in cuisine, culture, and art, and this morning you will discover the highlights of this fascinating city. Accompanied by our guide, enjoy a walking tour of the Born neighborhood and the Gothic Quarter, then stroll down one of the city's most important streets to reach the Cathedral of Barcelona. Continue the walking tour through the narrow streets of Barcelona's oldest part and discover the many secrets it holds. Marvel at the quaint medieval places, hidden to the crowds, and learn about their huge historical significance. Follow your guide through the streets of the Born neighborhood and past Santa Maria del Mar church. Then board an air-conditioned coach for a panoramic tour through the city. Driving along the coastline, passing by the Olympic Port, the beach, and the fisherman’s quarter called Barceloneta, admire the intense changes the city underwent with the organization of the Olympic Games in 1992. We then head up to Montjuïc Mountain, the main site of the Olympic Games in 1992, to enjoy the amazing views over the city during a cable car ride. Our final stop is at the MNAC viewpoint offering one of the most spectacular panoramic views of Barcelona before proceeding along Passeig de Gracia passing by some of the most emblematic Gaudi buildings such as Casa Batlló and la Pedrera. This tour is conducted in both English & Spanish and has a  duration of 4.5 hours approximately.